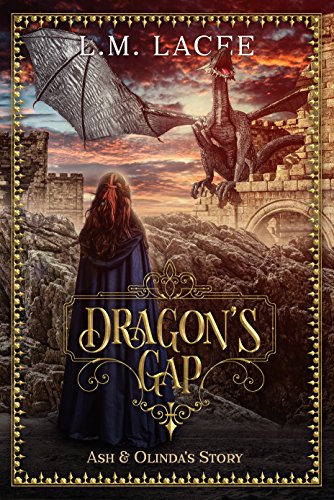 In Ash and Olinda we find that we discover that Olinda realizes that not only myths and legends from the pages of fantasy are true, but she herself is  a myth. This defies logic!

For Olinda this is no story.

– One day she was a grief stricken daughter coping with the loss of her beloved mother.
– The next day she is running for her life, and keeps on running for three, long fraught with danger, months.
– Until she finds Dragon’s Gap, a place of safety and peace.

Finding she is not wholly human but something supernatural or more fantastical, an actual figure from legends, tests all Olinda’s hard won sanity.
Although not as much as learning she is a shadow to a mythical being, Dragon Ace Battle. How is anyone supposed to get their head around this and stay rational?

Ash and Olinda together are destined to be parents to twin dragons who themselves are legends. Right out of the pages of dragon history.
It is enough to have her hiding from her new life. Denial seems like a safe place to hide for Olinda, at least until her head stops spinning.

Commander Ash Battle. Second eldest of the Battle brothers. Fastest flyer of all dragons and rescuer of twin hatchlings is shocked to realise his life, that once consisted only of battles and the companionship of his brothers, is now ended. With one dramatic flight he becomes a shadow and father. There is no getting use to this new role slowly. Together as Ash and Olinda it is all at once and now!

Ash and Olinda, Not without a few adventures on the way.

Was it luck or by design that his shadow is Olinda, a wounded broken-hearted female, who does not trust herself or him. Ash will work to convince her he is worthy of not only her trust but her love. Together he and his dragon will mend her heart and ensure the survival of the future of dragon kind. Not without a few adventures on the way.